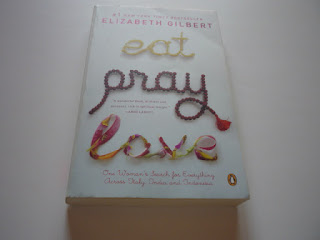 In her early thirties, Elizabeth Gilbert had everything a modern American woman was supposed to want-husband, country home, successful career-but instead of feeling happy and fulfilled, she felt consumed by panic and confusion.  This book is the story of how she left behind all these outward marks of success, and what she found in their place.  Following a divorce and a crushing depression, Gilbert set out to examine three different aspects of her nature, set against the backdrop of three different cultures: pleasure in Italy, devotion in India, and on the Indonesian island of Bali, a balance between worldly enjoyment and divine transcendence.
I found this book interesting in parts and boring and tedious in others.  There is a followup to this story-Weddings and Evictions, a memoir about her unexpected journey into second marriage.  I will read the second book (when and if I find it at a book sale) to find out what the rest of the story is.

The Valley of Amazement by Amy Tan 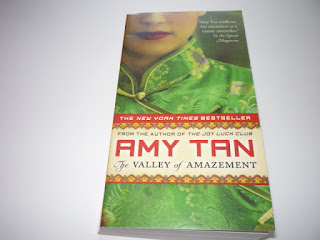 Shanghai, 1912.Violet Minturn is the daughter of the American madam of the city's most exclusive courtesan house.  But when the Ching dynasty is overturned, Violet is separated from her mother and forced to become a "virgin courtesan".
Spanning more than forty years and two continents, this novel maps the lives of three generations of women connected by blood and history-and the mystery of an evocative painting known as "The Valley of Amazement."  Moving from the collapse of China's last imperial dynasty to the rise of the Republic, the growth of lucrative foreign trade and anti-foreign sentiment, and the inner workings of courtesan houses, The Valley of Amazement interweaves the story of Violet, a celebrated Shanghai courtesan on a quest for both love and identity, and her mother, Lucia, an American woman whose search for penance leads them to an unexpected reunion.
This is a deeply moving narrative of family secrets, legacies, and the profound connections between mothers and daughters.
I think this is the first book I've read by Amy Tan and I found it to be a good read. 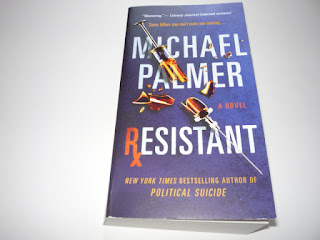 Dr. Lou Welcome never could have imagined what a sports injury would mean for his best friend, Cap Duncan.  Surgeons manage to save Cap's shattered leg, but the open wound is the perfect breeding ground for a deadly microbial invader committed to eating Cap alive from the inside out.  Meanwhile, hundreds of miles away, a teenage girl is fighting for her life against the same microbe.  The germ is resistant to any known antibiotic-and the government scientist tasked with finding a cure has been kidnapped.  And time has already run out...
Turning to the Centers for Disease Control for help, Lou uncovers a link to the Society of One Hundred Neighbours, a terrorist organization whose members are holding our own health institutions hostage.  Like the microbe itself, One Hundred Neighbours will stop at nothing to further its agenda.  Now, from the hospital corridors where anything you touch can mean your end to the top corridors of domestic power in this war against humanity, Lou must put an end to a terrifying epidemic-if it doesn't kill him first.
This was quite the page turner, I really enjoyed reading it.

The Nature of the Beast by Frances Fyfield 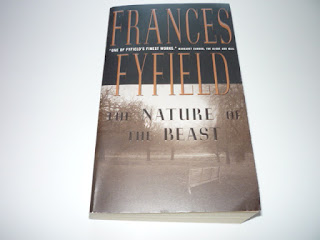 Amy Petty is dead.  But Amy Petty is alive...
When an intercity train from Kent to London crashes, it isn't only fate that decides who is killed: one passenger uses the opportunity for argument to spill over into murder, while another-blond, beautiful Amy Petty-sees the accident as a chance to leave her life behind.
But why would Amy Petty want the world to presume her dead?  Is it because of her husband, currently embroiled in a libel action against a national newspaper?  Douglas Petty, a former barrister, is rich, charismatic and evil tempered: he runs a dog sanctuary in a brutally eccentric manner.  Amy was to be his star witness; without her, his reputation faces ruin.
A brooding thriller of truth, betrayal and human instinct which I enjoyed reading.

My Secret Sister by Helen Edwards and Jenny Lee Smith 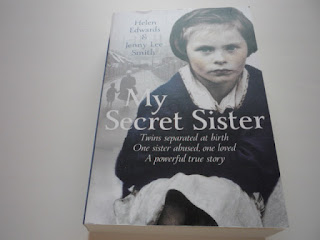 Helen grew up in a pit village in Tyneside in the post-war years, with her gran, aunties and uncles living nearby.  She felt safe with them, but they couldn't protect her from her neglectful mother and violent father.  Blamed for everything that went wrong in their lives, she suffered years of abuse.
Jenny was adopted at six weeks old and grew up in Newcastle.  An only child, she knew she was loved and with the support of her parents she became a champion golfer.  But she still felt that something was missing.
Neither knew of the other's existence until Jenny went looking for her birth family and found her sister Helen.  Together they searched for the truth about Jenny's birth-and uncovered a legacy of secrets and lies that overturned everything Helen thought she knew about her family.
Moving and inspirational, this is a story of the extraordinary bond of sisterhood, and a tribute to two women strong enough to let love, not bitterness, define them.
At times this true story is heartbreaking, especially when reading about the treatment of Helen as a child.  I did find it somewhat anticlimactic towards the end when all thy want to find out is if they are twins or not.  I think it would have been better if that fact wasn't printed on the cover.

The Silent Wife by A.S.A. Harrison 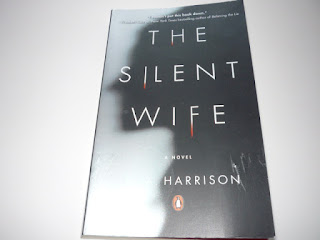 Jodi and Todd are at a bad place in their marriage.  Much is at stake, including the affluent life they lead in their beautiful waterfront condo in Chicago, a she, the killer, and he, the victim, rush haplessly toward the main event.  He is a committed cheater.  She lives and breathes denial.  He exists in dual worlds.  She likes to settle scores.  He decides to play for keeps.  She has nothing left to lose.  Told in alternating voices, The Silent Wife is about a marriage in the throes of dissolution, a couple headed for catastrophe, concessions that can't be made, and promises that won't be kept.
For me this was a very bizarre and weird story.  That's what I get for taking the word of a complete stranger standing next to me at the book sale.  She thought it was the best book she had ever read and was so sad that the author has died and there will be no more books from her.  I must have missed something! 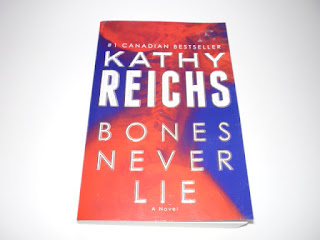 It's the nightmare scenario-a serial killer is on the loose and is targeting children.  Dr. Temperance Brennan is unexpectedly called in to the Charlotte PD to consult on two child murders that are separated by a thousand miles.  Tempe discovers that the two cases have one link in common, and she's suddenly in the middle of her own personal nightmare.  Years ago, Anique Pomerleau kidnapped and murdered a number of girls in Montreal, and narrowly missed being captured be Brennan and police detective Andrew Ryan.  Now, Pomerleau has resurfaced in the United States, connected to two more victims in Vermont and North Carolina.  When another child is snatched, the reign of nightmares promises to continue, unless Tempe can take this second chance to stop a psychopath.
As Tempe's past and present collide in this nail-biting chase to stop the deadliest and most elusive of predators, Brennan has to draw her bitter ex-partner out of exile, keep the local and state police from one another's throats, and face more than just her own demons.
I enjoy all this authors books and this one, once again did not disappoint.  AND it left you with a bit of a cliff hanger!

Well, that's it for now.