After saving a drowning man during a savage storm, Abby wakes up in a tropical paradise in a fight for her life. She has no idea how she got there, and notices changes in herself that she cannot explain. Haunted by unsettling dreams of her past, she sets out to escape, joined by Eric, who finds himself in the same predicament. Standing in their way is a madman, and his band of willing followers, with a mind set on murdering their unwelcome visitors. An eccentric hermit who has been living there for years offers them refuge, but they must deny his generosity. Escape is their only option. Yet, they discover this deceptive paradise is harder to leave than they had ever imagined. One mystery leads to another, until their escape throws them into even greater danger as Abby’s frightening past finally catches up with her. Her escape is only the beginning.
This was an ebook that I read on my phone at appointments etc.  At first I wasn't too impressed but as I got further into it I was eager to find out what was going to happen.  Quite the premise for a story.  Of course you are left with a cliff hanger at the end.  I found out there are two more books that I will read if I find them.

The Cuckoo's Calling by Robert Galbraith

When a troubled supermodel falls to her death from a snow-covered Mayfair balcony, it is assumed that she has committed suicide. However, her brother has his doubts, and calls in private detective Cormoran Strike to investigate. Strike is a war veteran, wounded both physically and psychologically and his private life is in disarray. The case gives him a financial lifeline, but it comes at a personal cost: the more he delves into the young model's complex world, the darker things get- and the closer he gets to terrible danger.

The Silkworm by Robert Galbraith

When novelist Owen Quine goes missing, his wife calls in private detective Cormoran Strike. At first, Mrs. Quine just thinks her husband has gone off by himself for a few days--as he has done before--and she wants Strike to find him and bring him home.
But as Strike investigates, it becomes clear that there is more to Quine's disappearance than his wife realizes. The novelist has just completed a manuscript featuring poisonous pen-portraits of almost everyone he knows. If the novel were to be published, it would ruin lives--meaning that there are a lot of people who might want him silenced.
When Quine is found brutally murdered under bizarre circumstances, it becomes a race against time to understand the motivation of a ruthless killer, a killer unlike any Strike has encountered before...

Career of Evil by Robert Galbraith

When a mysterious package is delivered to Robin Ellacott, she is horrified to discover that it contains a woman's severed leg.
Her boss, private detective Cormoran Strike, is less surprised but no less alarmed. There are four people from his past who he thinks could be responsible--and Strike knows that any one of them is capable of sustained and unspeakable brutality.
With the police focusing on the one suspect Strike is increasingly sure is not the perpetrator, he and Robin take matters into their own hands, and delve into the dark and twisted worlds of the other three men. But as more horrendous acts occur, time is running out for the two of them...
Career of Evil is the third in the highly acclaimed series featuring private detective Cormoran Strike and his assistant Robin Ellacott. A fiendishly clever mystery with unexpected twists around every corner, it is also a gripping story of a man and a woman at a crossroads in their personal and professional lives.
I read all three of the above books one after the other and I have to say I can't wait for the fourth book to come out.  Whether it is Harry Potter or a crime series J.K. Rowling is an amazing writer.  These were books that I was reading well into the night because I wanted to find out what was going to happen.  In all three there are interesting twists and turns in the stories and I would highly recommend them.
Posted by Janice at 8:11 PM 10 comments: 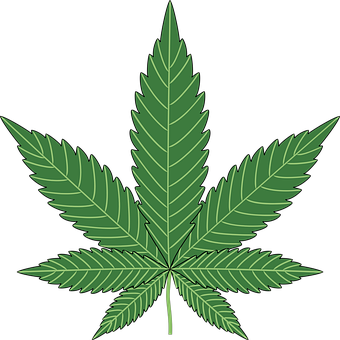 Marijuana became legal in Canada today.  Two stores were allowed to open in Calgary.  There are dozens of them ready and waiting to open but only two got the go ahead for today.We drove by one of them and there were HUNDREDS of people lined up to get in the store.  I couldn't believe it, there were security guards and barriers and cars all over the place.  One of the big supermarkets is in the same shopping centre but there was no way to get near it.  So we drove on and went to another shopping centre and got my bread and milk without any hassle or parking problems!

We had an amazing weekend in Fairmont Hotspring Resort, B.C.,for Kelsey and Joel's wedding.  It was absolutely beautiful.  I'll let the pictures speak for themselves. 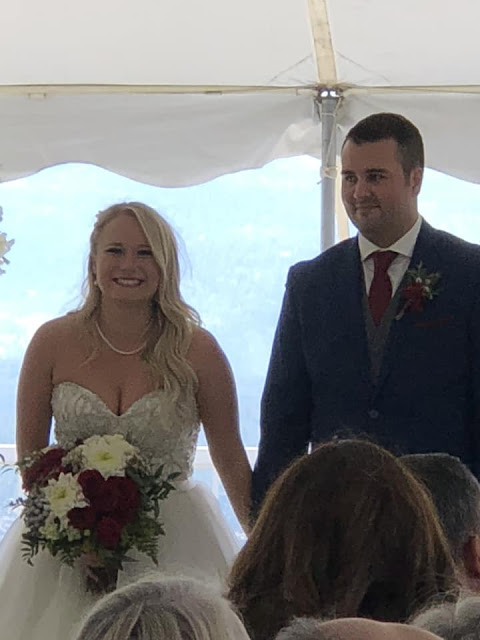 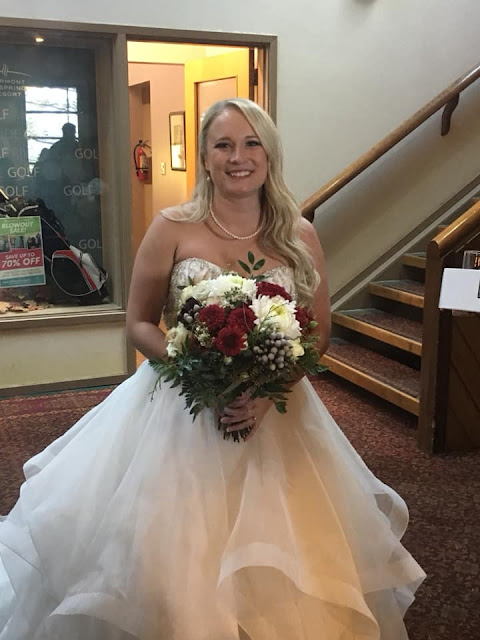 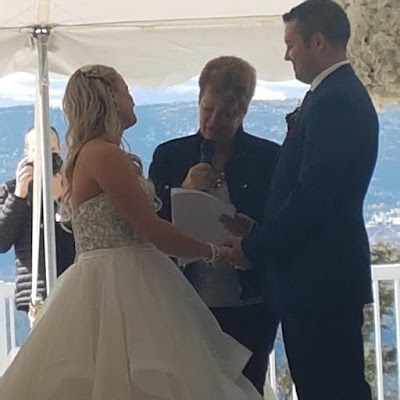 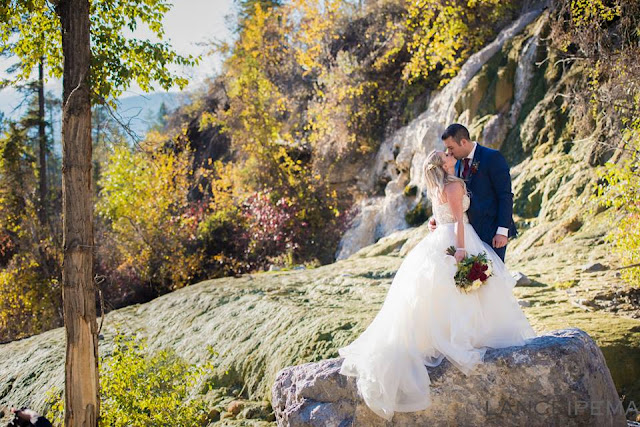 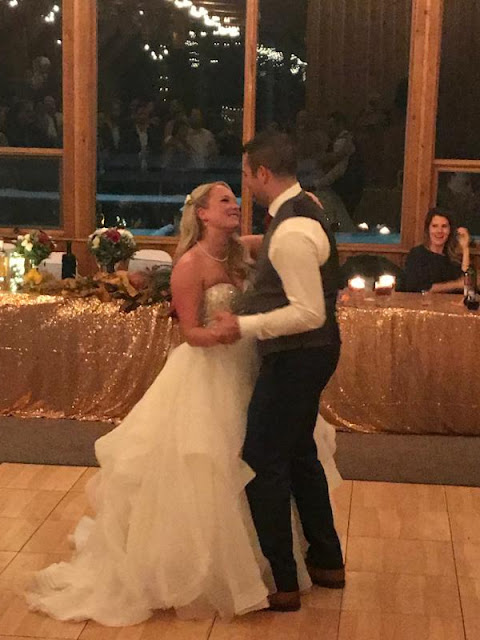 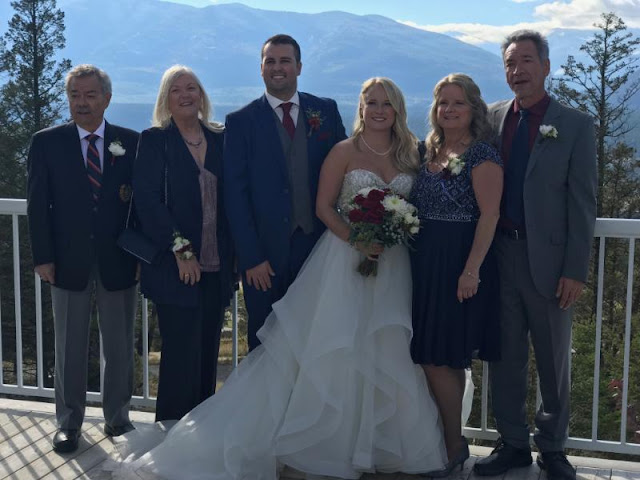 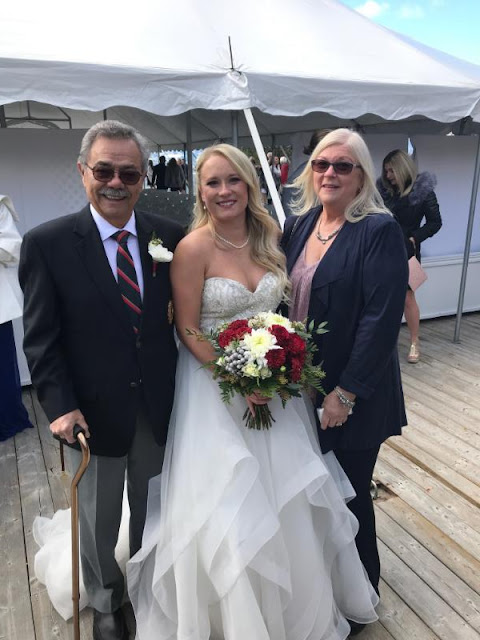 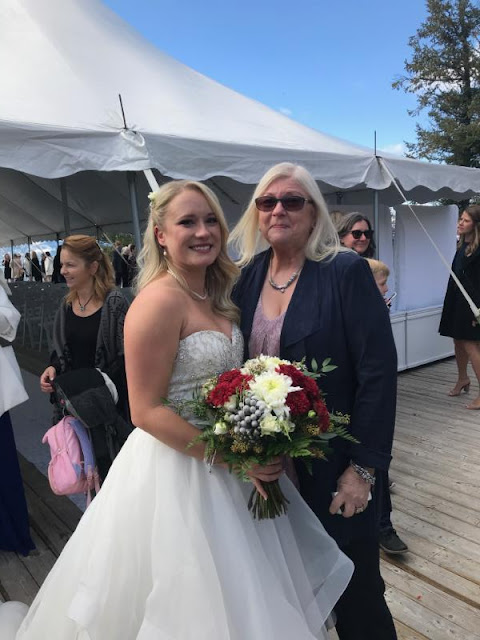 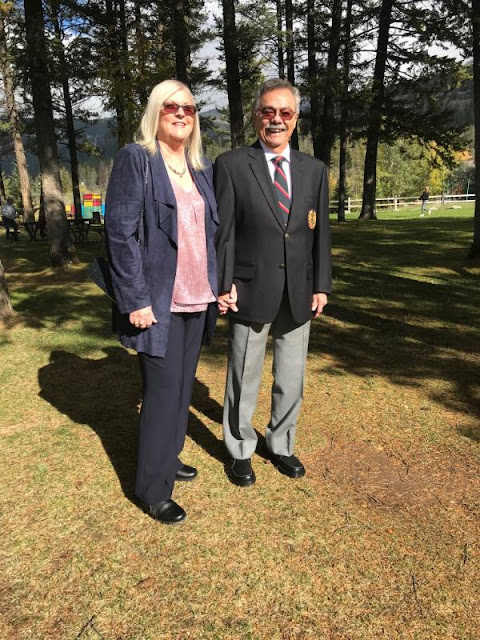 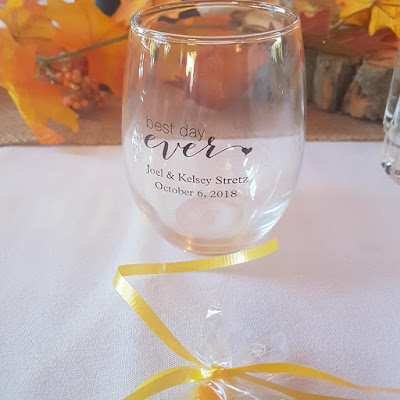 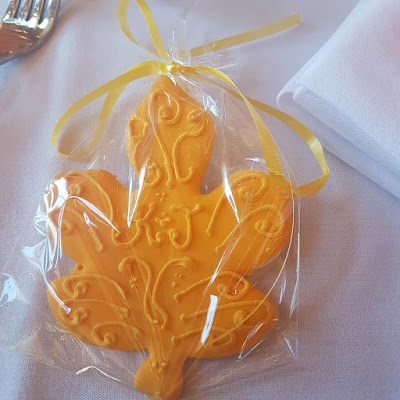 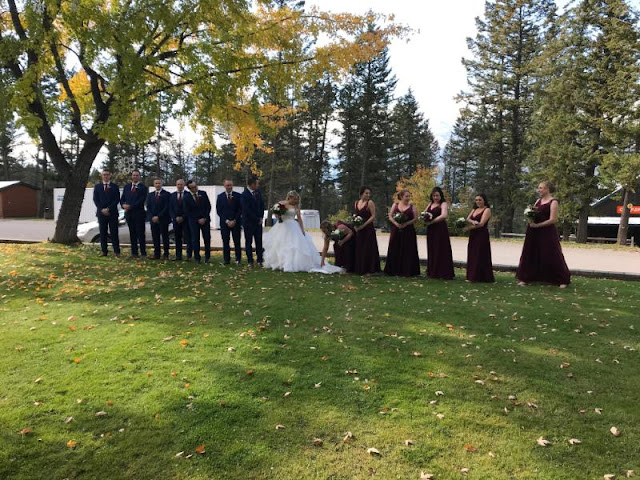 Even the deer came to check it out!! 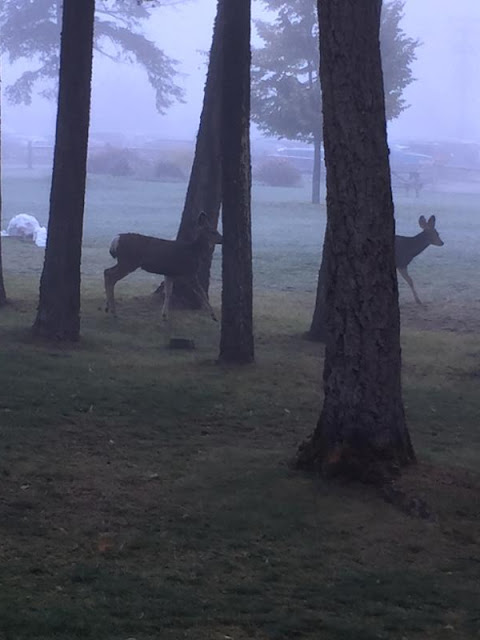 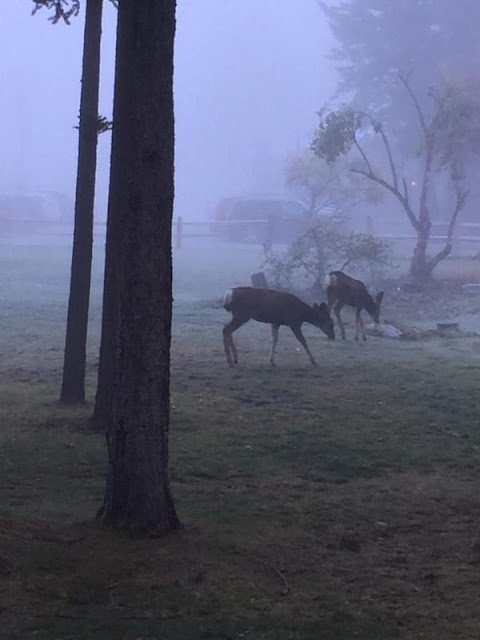 Just saw this on the news
This is the snowiest fall day since Oct. 21st, 1957
Snowiest Oct. 2nd on record
Snowiest day since April 10th, 2008
So far we are up to 40cm since last night and it's still snowing.
So they checked with the pandas at the zoo and they didn't seem to mind the snow!! 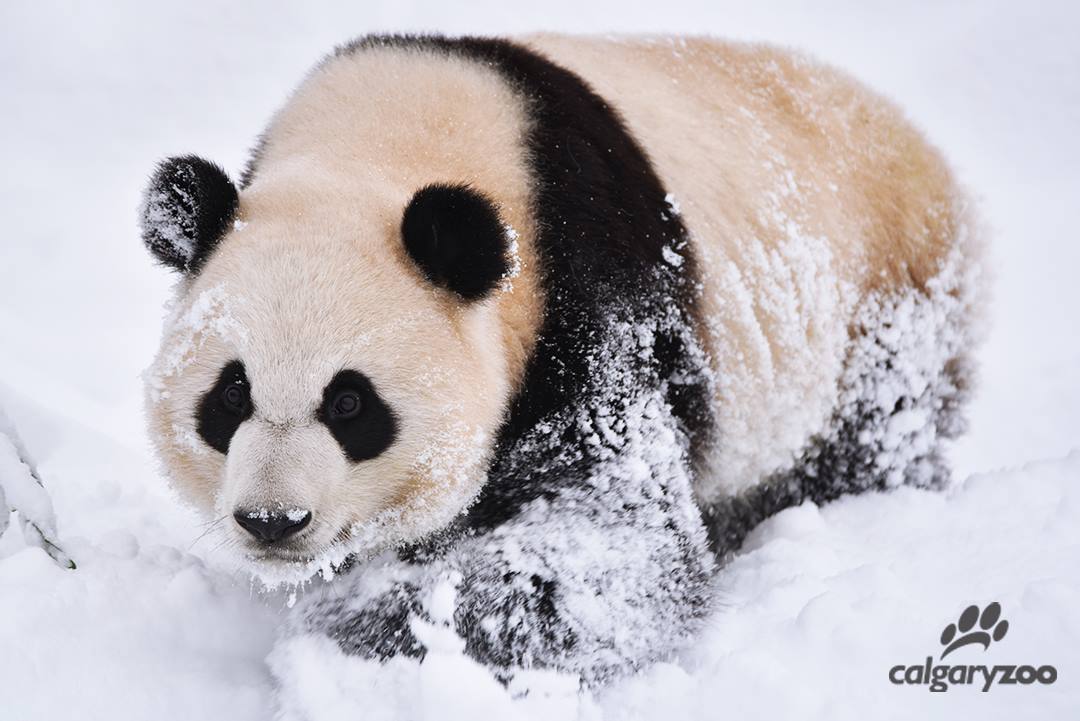 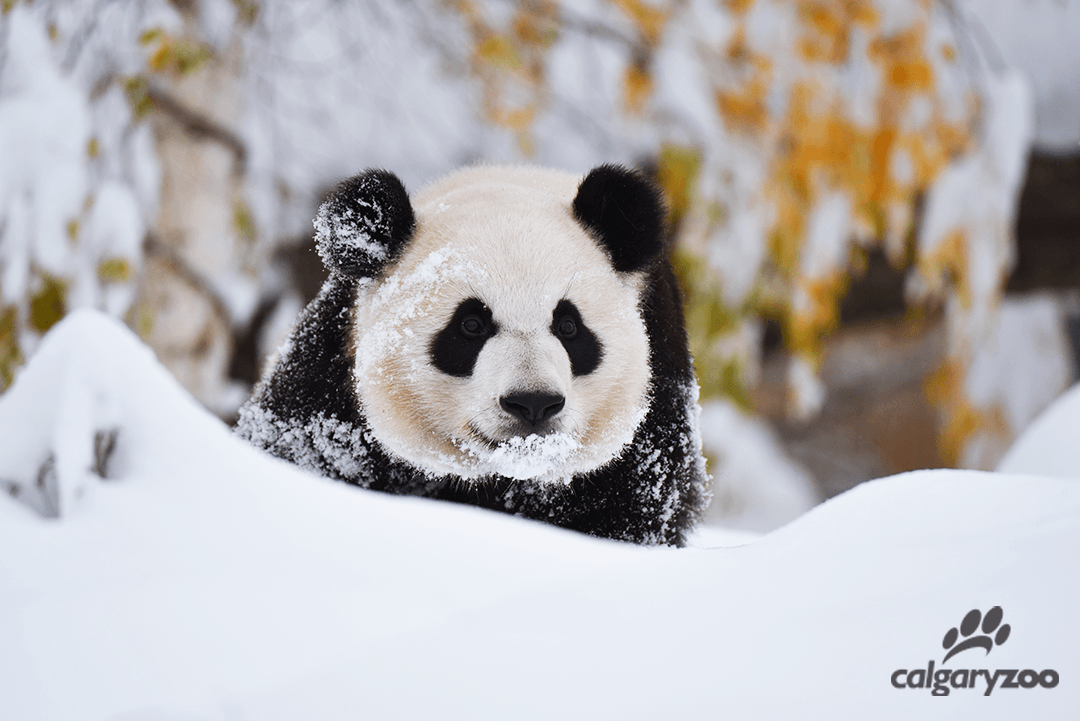 The weather forecasters said 16cm by tonight.  How about 20cm by this morning!  There is chaos in the city! The streets are like skating rinks and lots of the roads are at a standstill. I got up at 7:45 and one of our neighbours was shoveling our sidewalks.  That's a great help, now I just have to do the driveway and all the back. 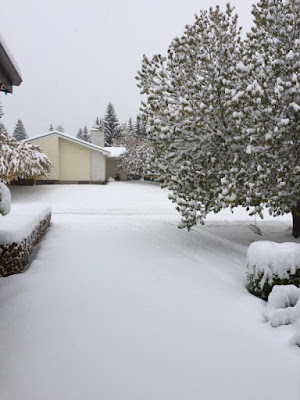 The driveway, through the screen door 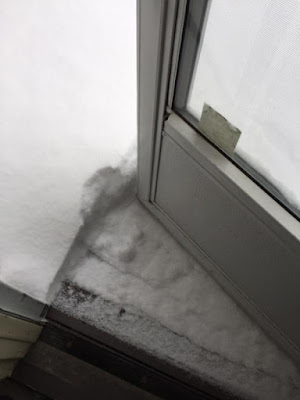 So much snow, that's as far as I can push the door open to the driveway! 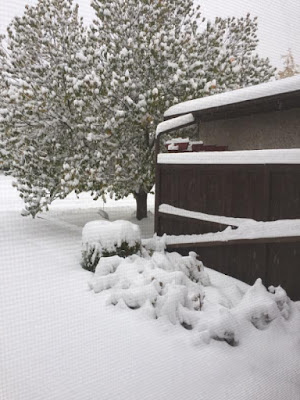 That pile is the raspberry patch! 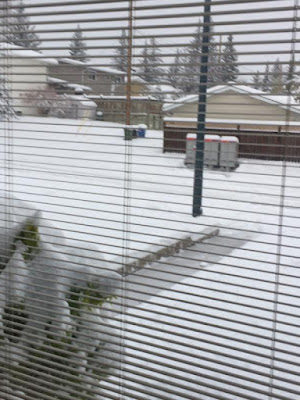 The neighbour had shoveled the sidewalk 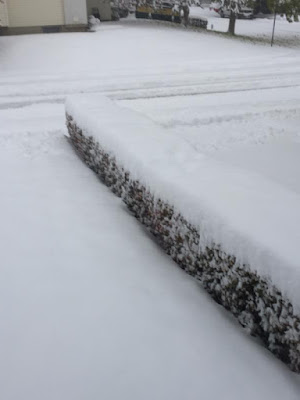 The front lawn and hedge! 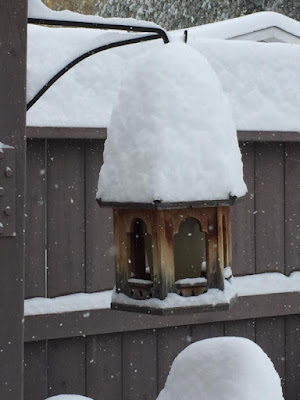 That's quite a mountain on the bird house! 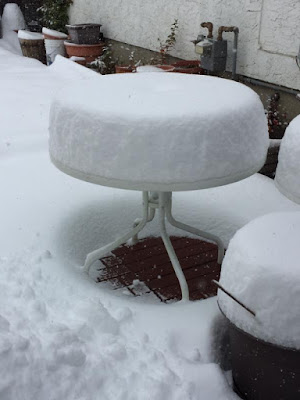 The icing on the patio table!

I guess this is the start of it!  Glad I got the last of the plants cut back and bagged yesterday for the compost pickup today. Kelsey and DIL were supposed to drive to Fairmount B.C. today to do all the preparations for the wedding on Saturday!  Just talked to Kelsey, she can't even get out of her neighbourhood to go to the bank.  I hope they wait until tomorrow.

We just had one of the coldest Septembers recorded.  Average temp. was 7.2C.  But now we are into a new month and so it's snowing!  We are expecting 16 cm. by tomorrow night.  I think I blinked and missed fall!!  We are not impressed!!! 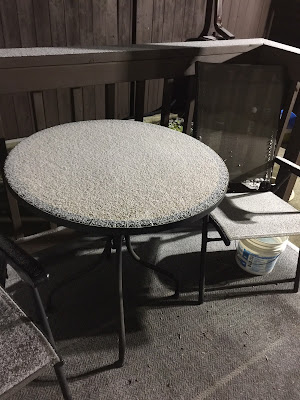