After the comments on my last post I thought I would fill out the story a bit.

I am one of five siblings, second in the pecking order.  When my older brother and I were probably about 7 and 5 my parents were thinking of going to Australia.  That was when you could go for 10 pounds.  Apparently my grandparents made such a fuss about us going to the other side of the world and never seeing us again that my parents relented and said we wouldn't go.  Add three more kids to the mix and the subject came up again, this time to go to Canada.

My dad had been a policeman for 20 years and my mum did piecework sewing from home.  She made everything from baby dresses to suede coats to tents!!  My brother and I spent many evenings sitting on the living room floor turning out dozens of collars and miles of piping with a knitting needle to poke the corners and end out, always worried we would poke the needle through the end and my mum would have to make another one.  She always said that the reason she did the sewing was so that the family could go on a holiday every year-which we did.  The last holiday was to Hasting.  We had a big army tent which we pitched in a farmers field.  My youngest brother was 6 weeks old!!!

At that time in Manchester (1965) my parents didn't think there was much of a future for the five of us and we would have a better life and more opportunities if we went to Canada. After going through all the hoops to emigrate off we went.  We brought two tea chests full of household goods and in my Dad's passport, that I still have, it said that he had 60 pounds!!

The friends that we were coming to lived in Calgary.  My parents original plan was to go to Edmonton but when my dad started corresponding with his friend he suggested we come to Calgary where he and his family lived.  We decided to do that.  The only reason we took the train to Edmonton was because it didn't go to Calgary.  He came up to Edmonton and picked us all up and we drove to Calgary.

It was pretty cramped quarters at their house as there were 11 of us in the house but my parents were very grateful that we were able to stay with them.  A few days after we got there my dad went to an employment centre and got a job at an iron foundry. It was hard work and long hours but we needed money so we could move into our own house.  It wasn't long before we were able to do that, and about a year later my parents bought a house-something they would never have been able to do if we had stayed in England.

My older brother had finished school in England so he decided to take an apprenticeship for a trade.  I was going into my last year at grammar school in England but I was put with my age here which meant I had to do another 3 years.  I was not a happy camper.

Not long after my dad got a job with the Provincial Government as a social worker/investigator.  He stayed with that job until he retired at 55. At that time my parents moved to British Columbia where the house they bought overlooked the Okanagan Lake.  My sister had moved to British Columbia when she finished college and has been their ever since.  As my parents got older they decided to move back to Calgary as they felt there was more support for them here.  All siblings have married and have children.  My sister is the only one that doesn't still live in Calgary.

I don't think there were any regrets about coming to Canada.  About 3 years later my dads sister, husband and 2 kids followed in our footsteps and came to stay with us until they got settled here.

That turned out to be longer than I thought it would be but I hope you enjoy reading it. 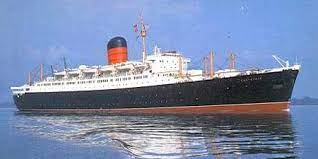 55 years ago today my parents, three brothers, 1 sister and myself got on The Cunard Carinthia and sailed away to a new life in Canada.  What a journey.  We went from Manchester to Liverpool where we got on the ship shown above. Looks so small compared to the ocean liners we see today.  We sailed up to Scotland where more people boarded.  Off we set for a 5 day trip across the Atlantic Ocean.  Five days turned into 7 as we had terrible weather and the ship, at some point, got a broken rudder.  My mum was sick from the minute we got on the ship until the minute we got off!!
We were all happy to get off in Montreal.  We then had a 2 day 3 night train trip to Edmonton.  All we saw was snow and trees, snow and trees, an occasional frozen lake and some tumbled down shacks.  We were all pretty anxious as to what we had come to.  It seemed like we never saw any towns or cities.  Maybe we passed through them during the night.
We finally arrived in Edmonton and were met by a friend of my dads he had been in the police with.  He and his wife had been in Canada a few years.  We stayed with them until my dad got a job and then we moved to our own house.
Posted by Janice at 8:30 PM 9 comments:
Newer Posts Older Posts Home
Subscribe to: Posts (Atom)