Finally had to bite the bullet and buy a new fridge/freezer.  After throwing out two large crisper drawers of frozen fruit and veg. it had to go.  Anyone who knows my DH knows that we had to go to EVERY store that sells appliances and look at a million fridges (only a slight exaggeration)!!  We were limited as to what size we could get.  The fridges today are wider and taller and as we had a space that couldn't be changed we had to get a smaller fridge.  It doesn't seem smaller though.  Because of the French doors it seems to have a lot more room and everything can be seen.  No more vintage bottles and containers hiding at the back.  I really like the pull out drawer for the freezer as well.  I'm happy with it!! 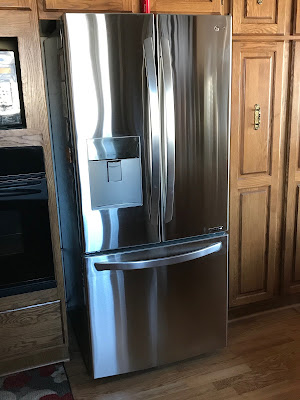 DS#2 on his flight back from London. He said it was very quiet in London where he was.  Only 3 people on the bus and everybody maintaining proper distancing.  He didn't get to do any shopping as they were confined to the hotel so no goodies for me this trip!  The flight was very basic.  They were giving out lunch packages and bottled water at the beginning of the flight and the same again closer to the end of the flight.  No galley or isle service.  He said no one was complaining.  He's worked all his shifts for this month now and hopes to be able to book just domestic flights for next month. 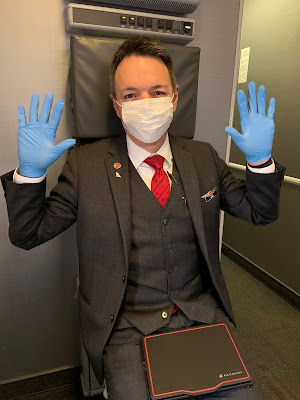 Very quiet around here.  Neighbours shoveling our snow for us.  We're well stocked for groceries.  Just have to go to the bank tomorrow and then home again.  Went for a walk this afternoon, nice and sunny and only -4C.  Lots of others walking but maintaining the correct distance.  I just wish more people would shovel their sidewalks!
Posted by Janice at 5:07 PM 11 comments:

Not Her Daughter by Rea Frey Gripping, emotional, and wire-taut, Not Her Daughter raises the question of what it means to be a mother—and how far someone will go to keep a child safe.Emma Townsend. Five years old. Gray eyes, brown hair. Missing since June.Emma is lonely. Living with her cruel mother and clueless father, Emma retreats into her own world of quiet and solitude.Sarah Walker. Successful entrepreneur. Broken-hearted. Kidnapper.Sarah has never seen a girl so precious as the gray-eyed child in a crowded airport terminal. When a second-chance encounter with Emma presents itself, Sarah takes her—far away from home. But if it’s to rescue a little girl from her damaging mother, is kidnapping wrong?Amy Townsend. Unhappy wife. Unfit mother. Unsure whether she wants her daughter back.Amy’s life is a string of disappointments, but her biggest issue is her inability to connect with her daughter. And now Emma is gone without a trace.
As Sarah and Emma avoid the nationwide hunt, they form an unshakable bond. But what about Emma’s real mother, back at home?
The story is told from Sarah's and Amy’s points of view and alternates between before, during, and after Emma goes missing. While I did enjoy this book there were parts that were just beyond belief.  She meets a guy and his son in a playground, agrees to go back to their house and stay the night.  Really, that sounds really safe!  The ending was beyond belief!  It's the ending that most people would like but it was so far beyond belief that it kind of spoiled it, for me anyway. 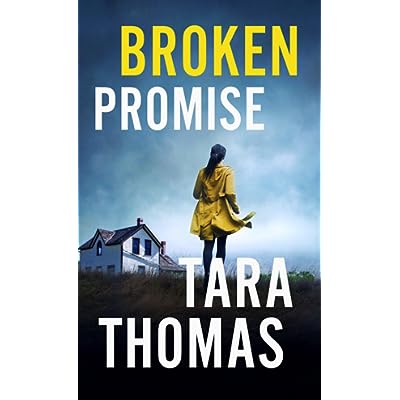 Charleston Police Officer Alyssa Adams made a promise years ago to protect innocent women from harm.  Now, she won't rest until she can reunite every lost daughter with her family.  Bring closure to every grieving husband.  And, most of all, find out what happened the night her own sister disappeared, more than ten years ago.
As the eldest of the Benedict brothers, Kipling will stop at nothing to protect his family from a threat that aims to destroy them once and for all.  But when a long-lost sibling is kidnapped by a powerful adversary, Alyssa is the only one he can turn to to get her back.
As Alyssa and Kipling band together to find their lost siblings, a powerful attraction builds between them that they can't ignore.  As the truth comes to light, will one broken promise tear them apart.
This book was given to me by a friend and I didn't realize it was the third book of a trilogy. I didn't think much of this book although to be fair I hadn't read books one and two so I was a little confused at times.  It was very obvious from the beginning of the book that the main characters were going to end up in bed together and I think there was a little too much time spent on this aspect of the story.  There was so much other more important things going on so I didn't think they had to spend so much time on the 'hot and bothered' aspect of the story.

The Perfect Girl by Gilly MacMillan 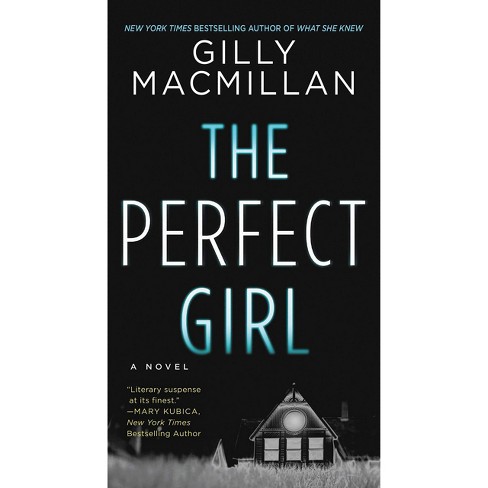 Zoe Maisey is a seventeen-year-old musical prodigy with a genius IQ. Three years ago, she was involved in a tragic incident that left three classmates dead. She served her time, and now her mother, Maria, is resolved to keep that devastating fact tucked far away from their new beginning, hiding the past even from her new husband and demanding that Zoe do the same.

Tonight Zoe is giving a recital that Maria has been planning for months. It needs to be the performance of Zoe’s life. But instead, by the end of the evening, Maria is dead.

In the aftermath, everyone—police, family, Zoe’s former solicitor, and Zoe herself—tries to piece together what happened. But as Zoe knows all too well, the truth is rarely straightforward, and the closer we are to someone, the less we may see.
It is an interesting book. I wouldn't classify it as a thriller or a mystery.  There were parts that I found a bit tedious and wanted to get on with it.  The ending was a little predictable and far fetched in my opinion, but it was an easy read. When Billy, a troubled young man, comes to private eye Cormoran Strike's office to ask for his help investigating a crime he thinks he witnessed as a child, Strike is left deeply unsettled. While Billy is obviously mentally distressed, and cannot remember many concrete details, there is something sincere about him and his story. But before Strike can question him further, Billy bolts from his office in a panic
Trying to get to the bottom of Billy's story, Strike and Robin Ellacott-once his assistant, now a partner in the agency-set off on a twisting trail that leads them through the backstreets of London, into a secretive inner sanctum within Parliament, and to a beautiful but sinister manor house deep in the countryside.
And during this labyrinthine investigation, Strike's own life is far from straightforward: his newfound fame as a private eye means he can no longer operate behind the scenes as he once did. Plus, his relationship with his former assistant is more fraught than it ever has been-Robin is now invaluable to Strike in the business, but their personal relationship is much, much trickier than that.
It is another good mystery very much in the same vein as the previous Strike novels. If you have read those you know exactly what to expect here.
It begins where Career of Evil left off, at Robin Ellacott's disastrous wedding to the sullen and resentful Matthew, with Robin over the moon at being reinstated at Strike's detective
agency as partner.
A very interesting mystery involving politics, the horsey set and  radical left-wing activists.
Apparently JKR finished Book 5 in January but, apparently, the release is supposed to be the end of the year.  Looking forward to it! 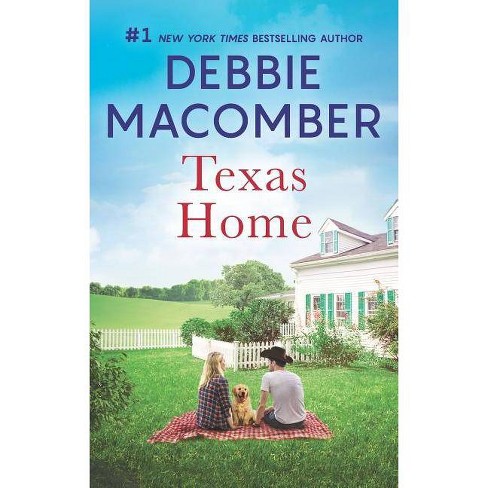 Welcome to Promise, a small town in the heart of Texas where the neighbors are friendly and you just might find love.
Nell’s Cowboy
Nell Bishop, widowed mother of two children, is turning Twin Canyons into a dude ranch. One of her first guests is Travis Grant: a celebrity of sorts, a wannabe cowboy and an Easterner known for his books about the West. Her kids adore him—and she has to admit she’s drawn to him, too. But it’s too soon to be thinking of love and marriage again. Isn’t it?
Lone Star Baby
When Amy Thornton shows up in town pregnant and alone, she’s looking for some guidance and compassion, so she turns to Reverend Wade McMillan. He might be a minister, but he’s also a man. An unmarried and very attractive one. But is it as a man that he responds to Amy? Or as a man of God? Maybe it’s both. Amy needs the town’s help to get back on her feet. What she wants is the love of a man named Wade…
I was given this book by my neighbour.  I'm not sure it's even one step above a Harlequin romance.  It's so unrealistic, 'pie in the sky' nauseating.  I know lots of people love these books.  It gets 5 star ratings on all the book review sites!!  It's just not my thing, I spend too much time rolling my eyes at what is happening in the story!!   It didn't take very long to read it and if you want a mindless, feel good story this is the book for you-just not me!!!!
Posted by Janice at 10:15 AM 6 comments:
Newer Posts Older Posts Home
Subscribe to: Posts (Atom)