I took a walk around the garden this morning. 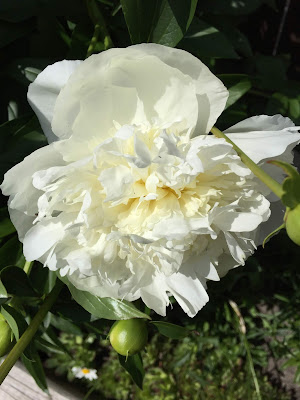 This is the first peony to bloom, there are close to a hundred buds on the plant and it is about 5 feet tall!!  Sadly the blooms last such a short time, and even shorter if it rains, which is forecast for Friday, or it gets really windy. 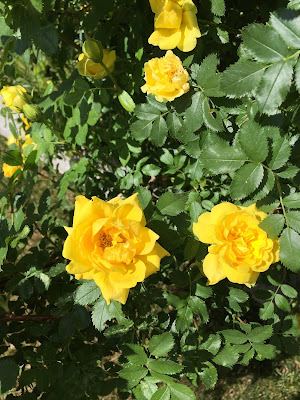 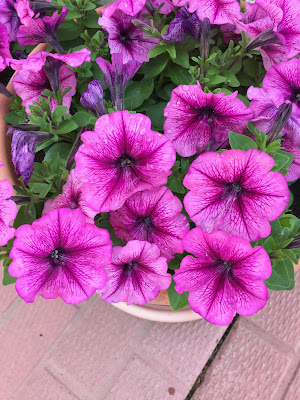 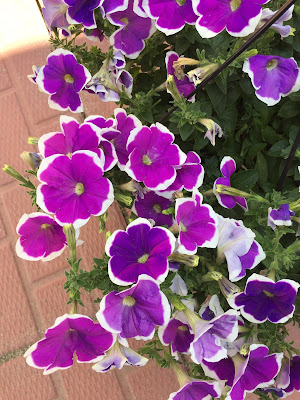 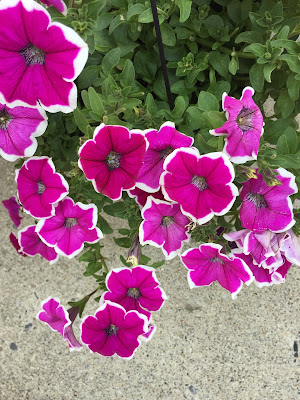 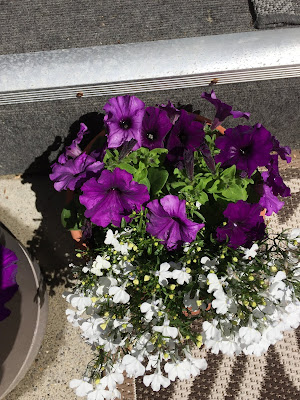 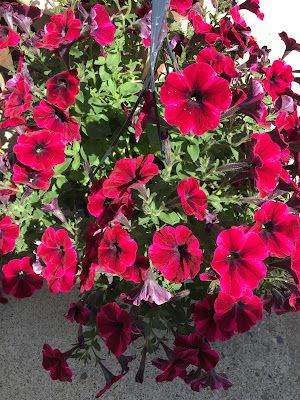 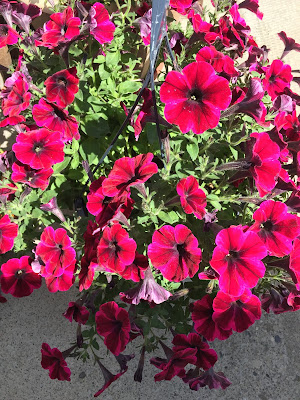 Lots of baskets and pots of petunias. 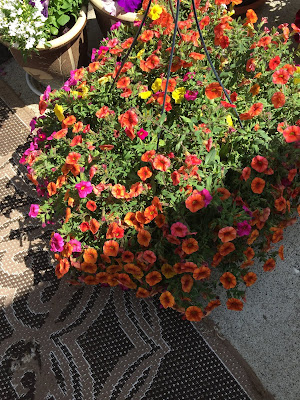 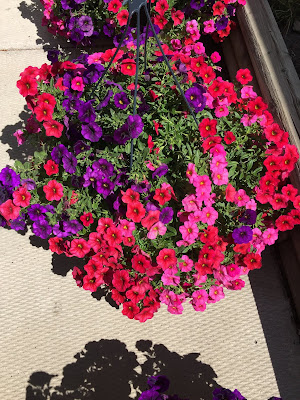 These baskets are just loaded with little flowers, can't remember the name of them.  Takes for ever to dead head them! 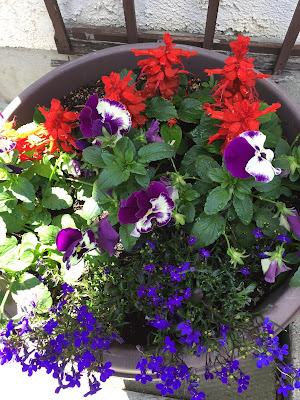 Lots of pansies, salvia and lobellia. 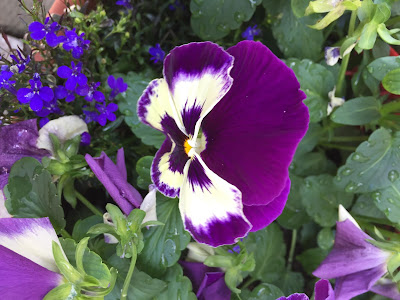 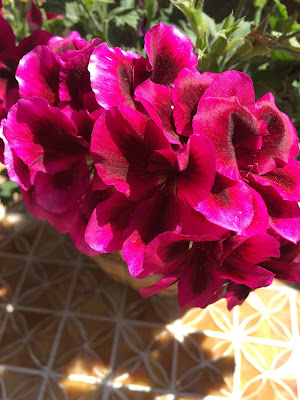 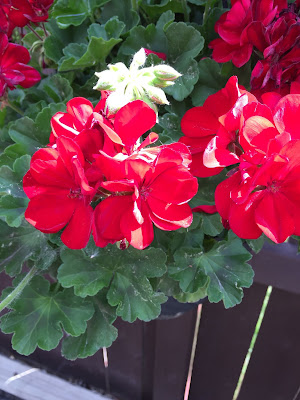 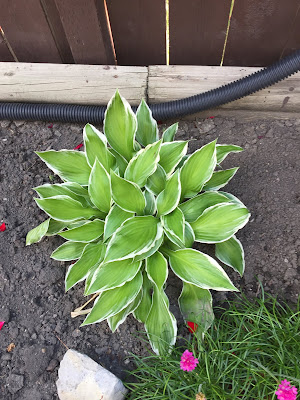 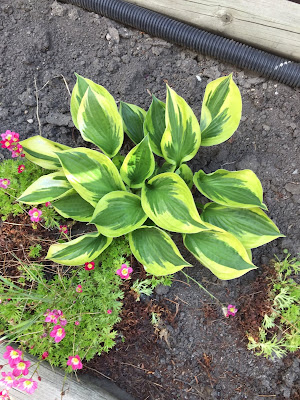 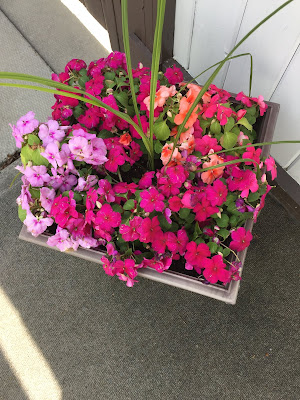 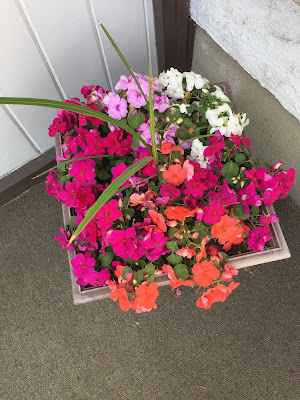 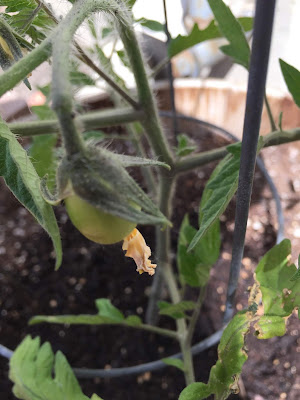 The first tomato.  The label said Supremo but the picture looks like Roma.  It's only the size of a grape. but it's a start. A few beans are peaking through the soil but no sign of the zucchini
Having shingles has certainly curtailed my planting this year.  I've only planted about half of the pots and baskets I usually do and very little in the veg department.  Some of my flower beds are-as my mother would have said-'choked with weeds'.  It's amazing how the heat brings on the nerve pain and I can only manage about 45 minutes in the garden and then I'm done.  Hopefully, slowly but surely, I'll get  some of it in order, but if not there's always next year!!
Posted by Janice at 8:42 PM 9 comments:


All By Myself by Mary Higgins Clark

Fleeing the humiliating arrest of her husband-to-be, Celia Kilbride, a jewelry expert, hopes to escape from public attention by lecturing on a brand-new cruise ship-the Queen Charlotte.
On board she meets eighty-six year old"LadyEm".Immensely wealthy, Lady Em plans to wear her priceless emerald Cleopatra necklace, which, according to legend, places a deadly curse on whoever brings it to sea.
The Queen Charlotte is three days out and Lady Em is found dead-and the necklace is missing.  Is it the work of her devoted assistant or her lawyer-executor  Is it the scholar who is lecturing on board, or a guest on the ship who is planning to spread his wife's ashes at sea?  Or is it the young lawyer who tried to persuade Lady Em to return the necklace to Egypt?  The list of suspects is large and growing.
Celia does not realize that her friendship with Lady Em has not escaped the notice of the killer.  With the help of her new friends Willy and Alvirah Meehan, she must avoid the danger that awaits her before the ship reaches its final destination...
Another fast, easy read from MHC.  Her books are very predictable and usually always have a happy ending.  If you want a book that doesn't require much brain power, this is the book.
Gray Mountain by John Grisham
The year is 2008 and Samantha Kofer's career at a huge Wall Street law firm is on the fast track-until the recession hits and she is downsized, furloughed, and escorted out of the building.Samantha, though, is offered an opportunity to work at a legal aid clinic for one year without pay, all for a slim chance of getting rehired.
In a matter of days Samantha moves from Manhattan to Brady, Virginia, population 2,200, in the heart of Appalachia, a part of the world she has only read about.  Samantha's new job takes her into the murky and dangerous world of coal mining, where laws are often broken, communities are divided, and the land itself is under attack.  But some of the locals aren't so thrilled to have a big-city lawyer in town, and within weeks Samantha is engulfed in litigation that turns deadly.  Because like most small towns, Bradey harbors big secrets that some will kill to conceal.
I really enjoyed this book, although the main character, Samantha, made some foolish decisions at times that put her own safety in great jeopardy!  The book highlights the injustice of strip mining and mountain topping and the effect it all had on the economically poor people living in the Appalachia valley.  It made you feel so bad for these miners that had black lung from working in the mines, but really had no options.  As most books I found the ending predictable but I still enjoyed it.

In the small Vermont town of Canaan, college student Rachel Rath is being watched. She can feel the stranger’s eyes on her, relentless and possessive. And she’s sure the man watching her is the same man who killed her mother and father years ago: Ned Preacher, a serial rapist and murderer who gamed the system to get a light sentence. Now, he’s free.Detective Frank Rath adopted Rachel, his niece, after the shocking murder of her parents when she was a baby. Ever since, Rath’s tried to protect her from the true story of her parents’ deaths. But now Preacher is calling Rath to torment him, and threaten Rachel.  Then local girls begin to vanish, and when a few are found, Rath along with Detective Sonja Test, must unravel the threads that tie these new crimes to that  long-ago nightmares. Soon they will learn that the truth is more twisted than anyone could guess, rife with secrets, cruel desires, and warped, deadly loyalty.
This book is the sequel to The Silent Girls that I read in July 2017.  I  enjoyed the first book and enjoyed this one as well. The book picks up where the first one ended.  It was very suspenseful and scary and had you wanting to keep reading far later into the night than you should.  There are twists and turns along the way and a quite surprising ending.  Highly recommend both books.

Is anyone else having trouble with blogger?  It's taken me ages, over several days, to write this post-very frustrating.  The text keeps jumping all over the place and the font changes at will.  So glad to get this finished and can't wait to hit Publish!!
Bye for now.
Posted by Janice at 1:50 PM 2 comments:
Newer Posts Older Posts Home
Subscribe to: Posts (Atom)