Things didn't go as easy for DIL as first thought.  She was in terrible pain for 2 days so she went to the emergency clinic, they cut the cast as the wrist was so swollen, xrayed again and decided she needed surgery to reset it.  She had the surgery on Wednesday and she came home yesterday.  She feels much better and hopes to be at their sons semi final peewee hockey game tonight.  We'll see her then.

These are a few picture of the amaryllis with its second set of flowers.  It's even taller than the first set-about 25"- and still no leaves. 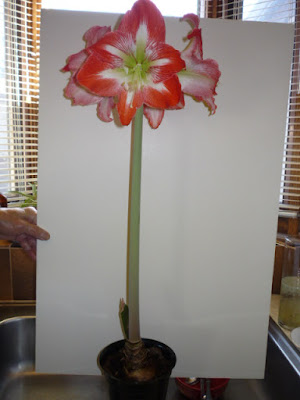 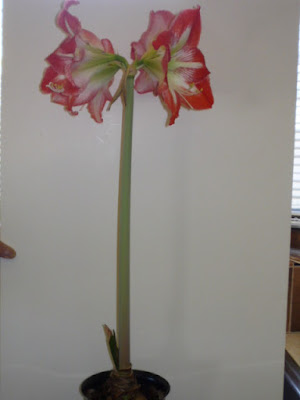 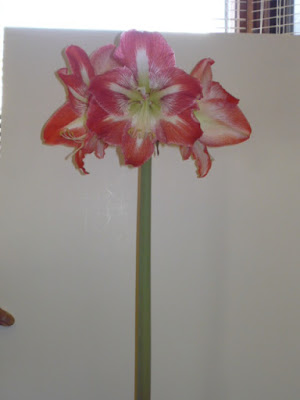 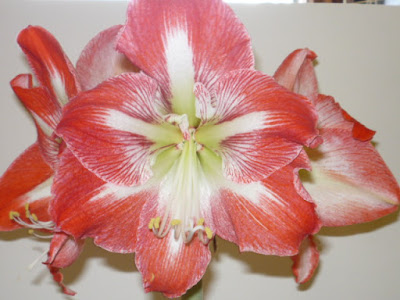 Added an update to the previous post about the books. 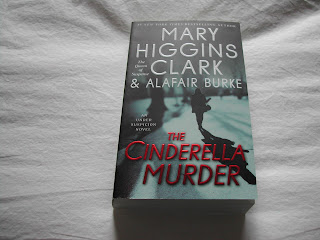 Reality drama Under Suspicion is a smashing success after helping solve an infamous murder with its very first episode.  Now television producer Laurie Moran finally has the perfect topic for the next installment of the cold case series: the Cinderella Murder.  Twenty years ago, beautiful and brilliant UCLA student Susan Dempsey was found dead in the Hollywood Hills the morning after she was scheduled to audition for the lead in an up-and-coming director's new film.  Her car was parked miles from her body, and one of her shoes was missing.  With suspects ranging from tech billionaires to Tinseltown elite, Laurie and Under Suspicion host Alex Buckley are certain the sensational case's suspense and drama are perfect for the silver screen.  But is Cinderella's murderer ready for a close-up?
This is the second in a series of books based on the Under Suspicion reality show produced by Laurie Moran.  The story was interesting but rather predictable.  You knew there would be a good outcome.

Speaking in Bones by Kathy Reichs 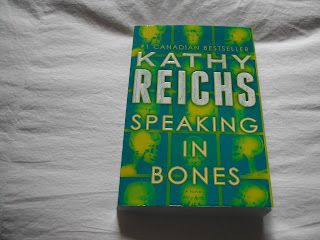 Professionally, Temperance Brennan knows exactly what to do-test, analyze, identify.  Her personal life is another story.  She's at a loss, wondering how to answer police detective Andrew Ryan's marriage proposal.  But the matter of matrimony takes a backseat when murder rears its head.
Hazel "Lucky" Strike-a strident amateur detective who mines the internet for cold cases-comes to Tempe with a tape recording of an unknown girl being held prisoner and terrorized.  Strike is convinced the voice is that of eighteen year old Cara Teague, who went missing more than three years earlier.  Strike is also certain that the teenager's remains are gathering dust in Tempe's lab.
Tempe has doubts about working with a self-styled websleuth.  But when the evidence adds up. Brennan visits the treacherous backwoods where the chilling recording and unidentified bones were discovered.  Her forensic field trip only turns up more questions-along with gruesome proof of untimely deaths.
While local legend of eerie nocturnal phenomena and sinister satanic cults abound, it's a zealous and secretive religious sect that has Tempe spooked and struggling to separate the saints from the sinners.  But there's nothing' including fire and brimstone, that can distract her from digging up the truth and taking down a killer-even as Brennan finds herself in a place where angels fear to tread, devils demand their due, and she may be damned no matter what.
I have read all of Kathy Reichs books and have enjoyed everyone.  The TV show 'Bones" is based on these books but for some reason I couldn't get into the show.  This is another crazy case for Tempe and it also continues the ongoing saga of her relationship with Andrew Ryan.  As usual, I enjoyed this book.

The Girl on the Train by Paula Hawkin 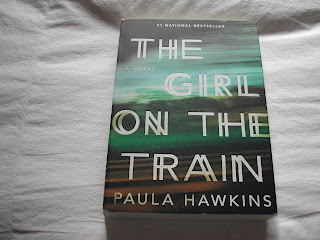 EVERY DAY THE SAME
Rachel takes the same commuter train every morning and night.  Every day she rattles down the track, flashes past a stretch of cozy suburban homes, and stops at the signal that allows her to daily watch the same couple breakfasting on their deck.  She looks forward to it.  She's even started to feel like she knows them.  Jess and Jason, she calls them.  Their life-as she sees it-is perfect.  Not unlike the life she recently lost.
UNTIL TODAY
And then she sees something shocking.  It's only a minute until the train moves on, but it's enough.  Now everything's changed.  Unable to keep her discovery to herself, Rachel goes to the police.  But is she really as unreliable as they say?  Soon she is deeply entangled not only in the investigation but in the lives of everyone involved.  Has she done more harm than good?
I'm still in two minds about this book.  The main character, Rachel, just got on my nerves, I wanted, at times, to shake her or slap her, she was so stupid.  She sort of came into her own as the book progressed but I was glad to finish it.  Maybe the movie will be better. 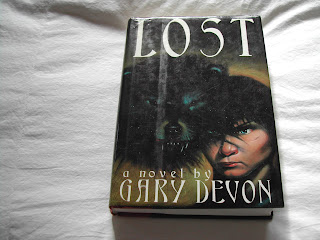 From page one, line one-when a twelve year old boy fires a gun at his own head while his little sister looks on-the novel seizes and holds us.
It carries us swiftly into a desperate chase...into a spiral of violence...into the story of a lonely woman who "collects" three small children...into the lives of the children, overwhelmed by their sense of panic and loss...and into the nightmare world of the psychopath (himself a child) whose only companion is the terrifying dog known as "the Chinaman"-as he stalks the woman and her frightened brood, pursuing them across months and miles, leaving behind him a trail of blood, lost in the grip of a murderous obsession.
I really enjoyed this book.  The 'psychopath' was really scary, even though he was only a child, and I wouldn't like to meet The Chinaman on a dark night! 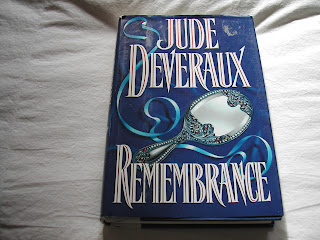 Hayden Lane, a bestselling romance writer, is a happy young woman-or so she believes.  Certainly her pals might chide her for not getting out more, but writing her novels is time-consuming.  Besides, the tales she weaves of dark intrigues and timeless love are more thrilling than any blind date could possibly be.  For her next book, about lovers whose present lives are complicated by their past lives, she decides to consult a psychic.  When the psychic tells her that in a pat life in Edwardian England, Hayden was a woman named Lady de Grey, she is intrigued.  And when she learns that Lady de Grey was a promiscuous woman who mysteriously disappeared one night, that she was rumored to have poisoned her husband, and that her ghost is said to haunt his home, Hayden is spellbound.
Although the psychic warns her not to investigate further, Hayden must know more.  When she meets a hypnotist at a dinner party-and he promises he won't make her cluck like a chicken-she can't resist volunteering.  But his trick goes wrong, and instead of merely remembering her lifetime as Lady de Grey, Hayden is whisked back to Edwardian times.  The moment she awakens, she faints, due to the unfamiliar sensation of Lady de Grey's extremely tight corset.  But soon Hayden will awaken again, to discover quite a different story about a woman history considered a trollop, a spectacular, brooding man...and the rapturous love that would be hers if she dared open her heart to the most mysterious adventure of all...
This book was kind of silly but fun as well.  It was really light reading but ot kept me reading to the end so I could find out what happened to Hayden.

I guess I should write what I think about the books I read because sometimes the back cover makes it sound really interesting but the book turns out to be crap.  Thanks Sue.