Just spent 2 hours shovelling, with help from my neighbour on the driveway!! 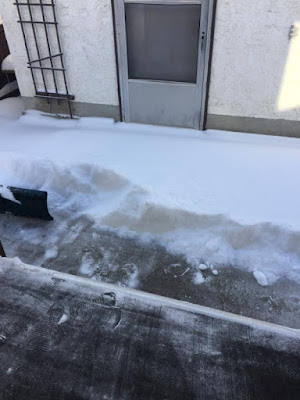 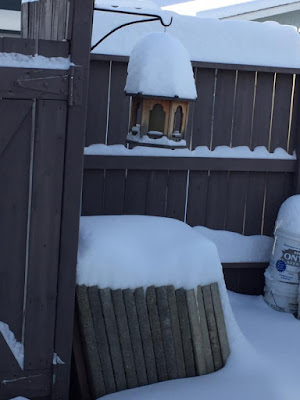 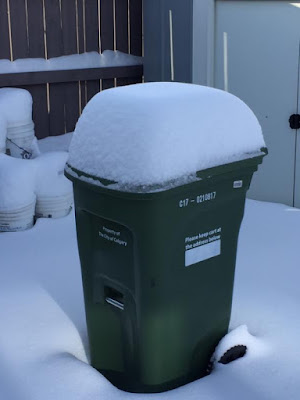 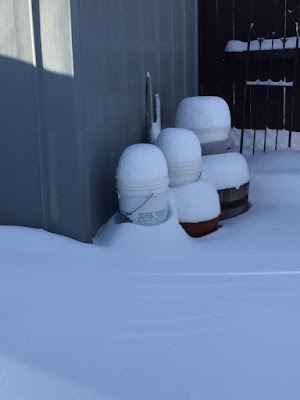 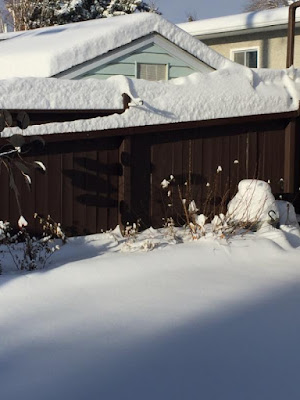 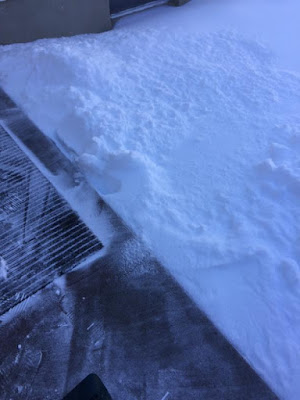 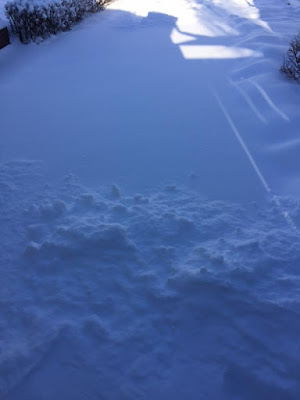 Supposed to get more snow tomorrow but hopefully not as much!!!
Posted by Janice at 1:59 PM 5 comments:

Soooooo many dresses.  So far she has been to 9 different salons and there are two more to go.  Then that is it-she says,lol.
We went today and there were 2 dresses that she really liked.  If nothing shows up at the next two salons I think one of those two might be it!!
I won't post pictures of the two special ones, just a couple of the others she tried today. 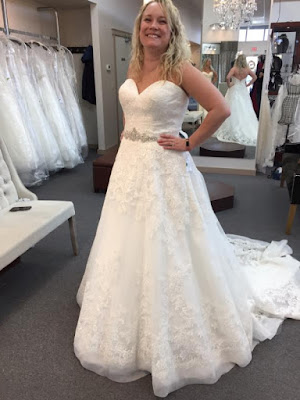 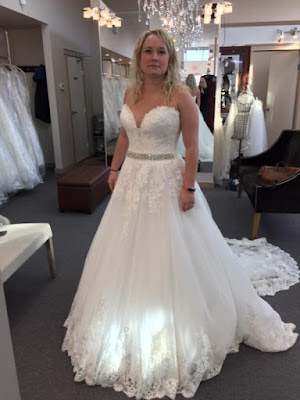 There are so many beautiful dresses but she pretty well has it narrowed down to the style she wants! 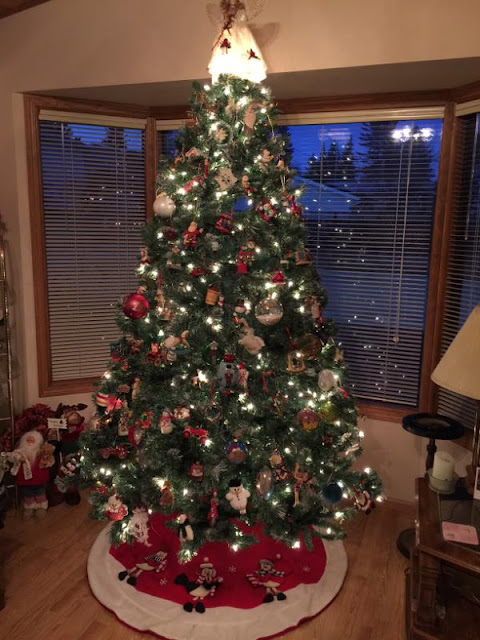 Spent most of the day yesterday decorating the tree and putting some other decorations out.  Probably only put about half of the collection out this year.  The problem is that all the Christmas stuff is kept in the rafters in the garage.  DH has been somewhat out of commission for the last 5 months with spinal stenosis (although there has been significant improvement) and therefore unable to climb the ladder let alone lift boxes down.  Fortunately youngest son and GD2 came over and got a lot of the boxes down for me.  After about 12 containers and the 71/2 foot tree were brought down I said that was enough.  Whatever was in those boxes would be more than adequate.  Mostly all the kitchen type stuff got left still in the rafters but that's okay, we'll manage!

As I was decorating the tree yesterday afternoon a bobcat walked down the driveway and crossed the street.  Fortunately he didn't have a rabbit in his mouth, although I'm sure that was what he was looking for, like the one in 2015!
Later on a buck with only one antler walked down the street.  He must have been in a fight to lose his antler.  Of course, no camera at the ready for either one.
You would think we lived in the country instead of a city of 1.3 million people, with the wild life that's come to visit.  We do live fairly close to some very big natural parks but the animals would have to cross some 6 lane highways to get into our neighbourhood!!! 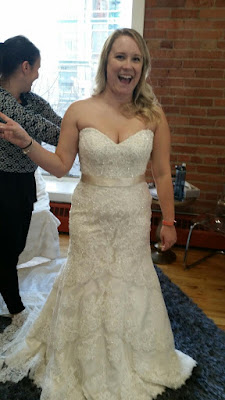 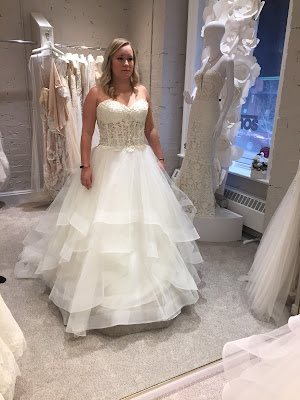 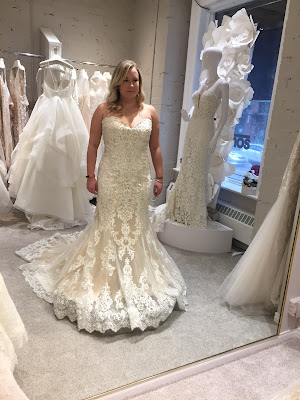 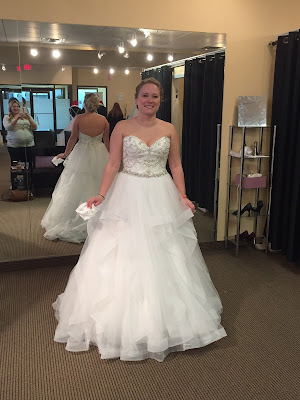 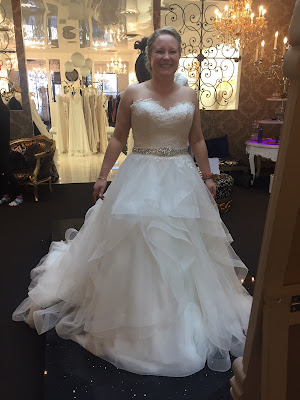 Still hasn't found the one that makes her say 'Yes!  That's it!!'  But she has tried on a couple that she would be happy with if she can't find the 'one'!
I love the second and fourth ones.
Posted by Janice at 1:44 PM No comments:

The Scent of Secrets by Clara Vine

The colourful, lively streets of Paris come as a welcome relief to Clara Vine after the dour countenance of Berlin, where bunkers and bomb shelters are being dug, soldiers march the streets in their high boots, and Jewish residents rush to make it home before curfew.  Though Clara is in Paris to make a film, her true work is never far from her mind.
Approached by a British intelligence officer, Clara is initially confounded by his request: Get close to Eva Braun and glean as much as she can about the Fuhrer's plans and intentions.  Clara has already established friendships with several high-ranking Nazi wives, but Eva Braun is another matter altogether.  Hitler keeps his "secret" girlfriend obsessively hidden, fiercely guarding their relationship as well as Eva's delicate psychological state.
From the gilded halls of the decadent City of Light to the quaint, cobbled streets of Munich, and even to the chilling, rarefied air of the Berghof, Hitler's private mountaintop retreat, Clara flirts with discovery at every turn-and a dangerous, devious plot unfolds.
I thought the first few chapters of this book were quite slow and boring.  About half way through the book things did pick up.  There seems to be some fact and fiction mixed together.  It did give some insight of life in Germany before the start of WW11.  I found some of it anticlimactic because most people know what happened in history and so you knew what would happen in the end.  I just read that this book is the 3rd book in a 5 book series. That explains a lot.  I don't think I will search out the other books.

Better Together by Sheila O'Flanagan

When Sheridan loses her job as a journalist at Dublin's biggest newspaper, she's determined to come back fighting.  Forced to take a position in a small country town, this seems almost impossible...until she discovers that the owner of her guesthouse holds the key to a big story.
But the longer Sheridan stays in Nina's home and the closer she gets to a certain handsome man in the town, the tougher it is to expose their secrets.  When it comes to love or success, will Sheridan go with her heart or her head?
This story is about the lives of two very different women.  Sheridan who is a journalist looking for a big story to advance her career, and Nina who runs a B&B and loves her husband way more than he loves her.  There lives become entwined when Sheridan finds out some information that could boost her career but destroy some people along the way.  What will she do?  This is a very easy read but definitely kept me interested even though it was quite predictable.

A Stolen Life by Jaycee Dugard
As I'm typing this the words and paragraphs are jumping all over the place.  I've had to load the pictures 3 times!  Hit Save and Publish and see what happens!!
x

In the words of Jaycee
In the summer of June of 1991, I was a normal kid.  I did normal things.  I had friends and a mother that loved me.  I was just like you.  Until the day my life was stolen.
For eighteen years I was a prisoner.  I was an object for someone to use and abuse.  For eighteen years I was not allowed to speak my own name.  I became a mother and was forced to be  sister.  For eighteen years I survived an impossible situation.
On August 26, 2009, I took my name back.
My name is Jaycee Lee Dugard.  I don't think of myself as a victim.  I simply survived an intolerable situation.
A Stolen Life is my story-in my own words, in my own way, exactly as I remember it.
This is an amazing story, to say the least.  Jaycee, age eleven, was on the way to school when she was kidnapped by Phillip Garrido and his wife Nancy.  He kept her chained and handcuffed in a shed and used her for his sexual pleasure.  She had two children by this man, the first when she was 13 and the second when she was 18.
Garrido was a convicted sex offender.  He made his mistake when he took all of them to his parole officers office.  Jaycee found the courage to speak out and stood up for herself.
This was a shocking read with an amazing story of a mother's love for her daughter
The Chemist by Stephenie Meyer

She used to work for the U.S. government.  An expert in her field.  She was one of the darkest secrets of an agency so clandestine it doesn't even have a name.  Then, one day, they came for her without warning.   She's been running ever since.
When her former handler offers her a way out-one last job in exchange for her freedom-she realizes it's her only chance.  But as she prepares for the toughest case of her life, she finds herself falling for the man she was sent to trap.  Now she has a choice:  return to the shadows, hunted and alone, or stand and fight.
I quite enjoyed this book.  Not at all what I would have expected from Stephenie Meyer.  It's an action packed thriller with a mysterious heroine who is an expert in her field but very naive in relationships.  I would definitely recommend this book.

Christmas at Woolworths by Elaine Everest. 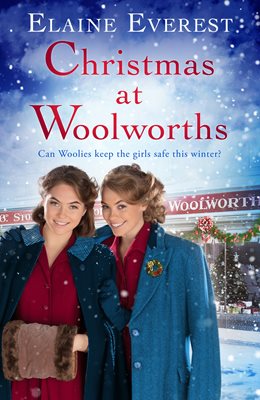 Best friends Sarah, Maisie and Freda are brought together by their jobs at Woolworths.  With their loved ones away busy fighting the enemy, their bonds of friendship strengthen each day.  Betty Billington is the manager at Woolworths, and a rock for the girls, having given up on love...Until a mysterious stranger turns up one day-could he reignite a spark in Betty?
As the year draws to a close, and Christmas approaches, the girls must rely on each other to navigate the dark days that lie ahead,,,
With so much change, can their friendship survive the war?
I found this book to be a very light read.  It covered certain aspects of WW11 but in a very light fluffy way.  Interesting read but very little of it based in reality.

An Irish Country Love Story by Patrick Taylor
It's the winter of 1967, and snow is on the ground in the colourful Irish village of Ballybucklebo, but the chilly weather can't stop love from warming hearts all over the country.  Not just the love between a man and a woman, as with young doctor Barry Laverty and his fiancee, Sue Nolan, who are making plans to start a new life together, but also the love of an ailing pensioner for a faithful dog that's gone missing, the love of the local gentry for the great estate they are on verge of losing, or Doctor Fingal Flahertie O'Reilly's deep and abiding love for his longtime home.
For decades, ever since the war, number One Main Street, Ballybucklebo, has housed O'Reilly and his practice.  An unexpected turn of events threatens to drive O'Reilly from his home for good, unless the entire village can rally behind their doctor and prove that love really can conquer all.
This is another feel good book about life in Ballybucklebo.  Things are moving along with Barry and Sue.  Will there be a new road put through the village at the cost of O'Reilly's house.  As all these books are 'feel good' books I think the answer is obvious but still an enjoyable read.