Paris, July 1942: Sarah, a ten year-old girl, is brutally arrested with her family by the French police in the Vel' d'Hiv' roundup, but not before she locks her younger brother in a cupboard-their secret hiding place-in the family's apartment, thinking that she will be back within a few hours.


Paris, May 2002: On Vel' d'Hiv's 60th anniversary, journalist Julia Jarmond is asked to write an article about this black day in France's past. Through her contemporary investigation, she stumbles onto a trail of long-hidden family secrets that connect her to Sarah. Julia finds herself compelled to retrace the girl's ordeal, from that terrible term in the Vel d'Hiv', to the camps, and beyond. As she probes into Sarah's past, she begins to question her own place in France, and to reevaluate her marriage and her life.
This was a really good book.  I didn't know anything about this part of WWII history.  Parts of it were heart breaking and I couldn't put the book down.  Highly recommend this book.

To the Power of Three by Laura Lippman

Josie, Perri, and Kat have been best friends since third grade-the athlete, the drama queen, and the popular beauty.  Growing up in an affluent suburb of Baltimore, they enjoy privileges many teenagers are denied.  But on the final day of school one of them brings a gun with her.  And when the police break down the door of the high school girls' bathroom, locked from the inside, they find two of the friends wounded, one of them critically....and the third is dead.
This is a pretty good story but I found it a little difficult keeping track of all the characters because of all the flipping back and forth to different time periods.  The conclusion was a little different than expected.

Police analyst Annabel wouldn't describe herself as lonely.  Her work and the needs of her aging mother keep her busy.  But Annabel is shocked when she discovers her neighbourès decomposing body in the house next door, and she is appalled to think that no one, including herself, noticed the womanès absence.  Annabel sets out to investigate, despite her colleaguesè lack of interest, and discovers that such cases are frighteningly common in her hometown.
A chilling thriller and a hymn to all the lonely people whose individual voices haunt its pages. It shows how vulnerable we are when we live alone, and how easily ordinary lives can fall apart when no one is watching.

This book was very different and really makes you think about living alone and therefore dying alone.  It kept my interest and made me want to keep reading to see what would happen.

Just got home from seeing the specialist.  All good news at the moment.  She is very pleased with the healing so far.  She said it is so good that instead of going back in 2 weeks I don't have to go back for a month!!!  Just keep putting the silicone cream in the divot and  keep it moist.  So I'm very pleased with that.

We have so much snow there is nowhere to shovel it to.  In my header picture the snow is now higher than the hedge!!  Apparently we haven't had this much snow since 2008!! Youngest son and grandson went out of town (3 hours south) to a hockey tournament on Friday night.  The town then got over a metre of snow dumped on them Friday night and Saturday.  The highways were closed and they didn't get home until Tuesday-instead of Sunday!  Grandson thought it was great-hotel with a swimming pool and missed 2 days of school. Son not too impressed-2 more days on the hotel bill, 2 days of work missed and a hair raising drive home when the roads were finally opened on Tuesday!  But they got home safe and sound so that was the main thing.
It's actually supposed to get above zero in a few days instead of endless days of -30C.  Then we'll be complaining about all the water and flooding!  Can't win.
That's it for now. 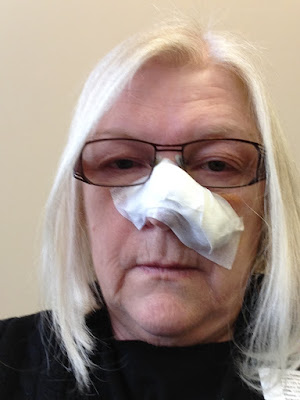 Not exactly one of my better looks!!!!
This all started out as what appeared to be a little paper cut on the outside of my left nostril.  This then became what I thought was a little pimple.  In the space of 4 weeks it got bigger and it was rock hard like there was a grain of rice under the skin.
Because of Christmas etc I didn't get to my doctor until Dec. 28th.  I told her that I didn't want to wait (weeks?) to see a specialist I wanted her to cut if off that very day, so she did and sent it away for analysis.
It took 2 weeks for the results to come back and to my absolute shock it was skin cancer!!
I was then referred to a specialist to have Mohs Microscopic Surgery.  So that is where I was yesterday!!
I get to take this lovely dressing off this afternoon, apply some special silicone ointment and put on a much smaller dressing.  I'm a little apprehensive to see the damage as they said the tumor went deeper than first thought.
We are trying to take a natural healing process for this.  I couldn't have stitches as there was no extra skin so stitches would have pulled my one nostril up and out of shape-lovely!!  This process takes more work and time but the scarring will hopefully be minimal.  I go back to see the specialist in a week.  If it is progressing as she feels it should then I just continue on with the same process.  If it hasn't progressed adequately then I will have to have a skin graft that they will take from in front of my ear-this will result in a bumpy scar on my nose.  We will have to wait and see.
Some of my shock at having skin cancer is that I DO NOT go out in the sun if I can help it.  I'm not a sun worshiper at all.  What I did learn though is that the sun damage that causes skin cancer. for the most part, happened before the age of 20.  Well, as I was born in 1951 I don't think there was any such thing as sunscreen back in those days.  I remember my mum putting Nivea cream on us so we wouldn't burn.  No sunscreen there.
I think parents today are much more aware of the damage the sun can do and usually slather their children with sunscreen-thank goodness.
I am supposed to rest at home for 3 days, which is good because that's how long I have to put a similar dressing on.  After that, all being well, I don't have to put a dressing on,just the silicone cream.
So I hope to do some reading, which is what I was doing from 3 to 5 this morning.  Hard to turn the brain off so didn't get a very good sleep.  Will just take it one day at a time.