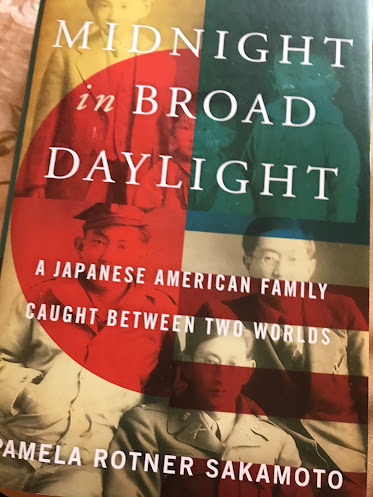 This is the true story of a Japanese American family that found itself on opposite sides during WWII.  An epic tale of family, separation, divided loyalties, love, reconciliation, loss, and redemption.
After their father's death, the Fukuhara children-all born and raised in the Pacific Northwest-moved with their mother to Hiroshima, their parents' ancestral home.  Eager to go back to America, Harry and his sister, Mary, returned there in the late 1930s.  Then came Pearl Harbor.  Harry and Mary were sent to an internment camp until a call came for Japanese translators, and Harry dutifully volunteered to serve his country.  Back in Hiroshima, their brothers, Frank and Pierce, become soldiers in the Imperial Japanese Army.
As the war rages on, Harry. one of the finest bilingual interpreters in the United States Army, island-hopped across the Pacific, moving ever closer to the enemy-and to his younger brothers.  But before the Fukuharas would have to face one another in battle, the U.S. detonated the atomic bomb over Hiroshima, gravely injuring tens of thousands of civilians, including members of the Fukuhara family.
Alternating between America and Japanese perspective, it captures the uncertainty and intensity of those charged with the fighting, as well as the deteriorating home front of Hiroshima-never depicted before in English-and provides a fresh look at the events surrounding the dropping of the first atomic bomb.
This was an excellent read, seeing both sides of a Japanese American family. Having two brothers in the Japanese Imperial Army and one brother in the U.S. Army during WWII.  Parts of the story were heartbreaking, especially for the part of the family that lived in Hiroshima.  Definitely would recommend this book.
War Girl Ursula by Marion Kummerow 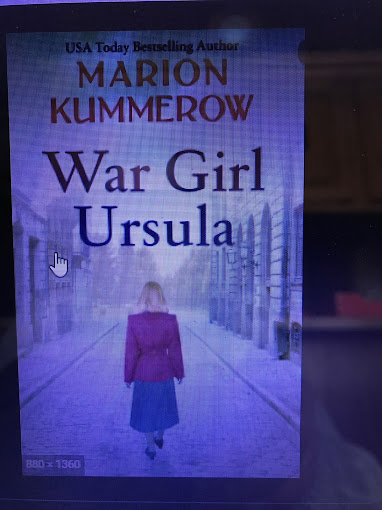 Berlin 1943: Compassion is a crime.
A prisoner escapes. A guard looks the other way.
Why does Ursula Hermann risk her life and brave the Gestapo to save a man she barely knows?
Ursula has always lived the law, never broken the rules in her life.
That is until the day she finds escapee British airman Tom Westlake and all the right she’s worked so hard to maintain goes wrong...
He runs.
And she does nothing to stop him.
Torn with guilt about what she did, Ursula battles with her decision when suddenly Tom returns, injured and pleading for her help.
This is her opportunity to make things right.
But shadows from the past tug at her heart, convincing her to risk everything, including her life, in order to protect a man from the nation her country is fighting. As they brave the perils and dangers of the ever-present Gestapo, will Ursula find a way to keep Tom safe?
Or will being on the opposite sides of the war ultimately cost both of them their lives?
It would appear this is book 1 in a series of 11
Ursula works at the prison in her hometown and is becoming disillusioned with the Nazi system and propaganda.  She begins to see with her own eyes the violence, and cruelty to certain segments of its own population,
When British bombers launch an attack on the prison and 4 prisoners escape  Ursula's life changes in ways she could never have foreseen. She becomes  caught up in the planning and execution of Westlake’s efforts to get him out of Germany back to England.
Her sister Anna is able to provide moral support to her as she gathers the courage over her terror and anxiety of what she is doing.  As this is book one in a series the ending is quite startling which, of course, makes you want to read the next one!
The Lost and Found Bookshop by Susan Wiggs 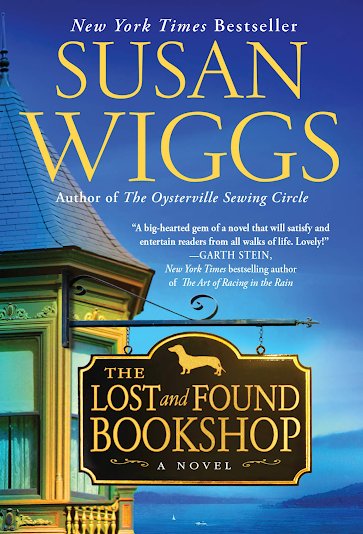 In the wake of a shocking tragedy, Natalie Harper inherits a charming but financially strapped bookshop in San Francisco.  She also becomes the caretaker for her grandfather, who grew up in the historic building that houses the store.  Grandpa Andrew struggles with memory loss, and Natalie wants to sell the building to pay for his care.  There's only one problem-her grandfather owns it outright and refuses to sell.
Reluctantly, Natalie takes over the shop and hires an ex-Marine from Georgia, Peach Gallagher, to help with repairs.  Peach's young daughter, Dorothy, is a bright light during Natalie's long days, and even manages to connect Natalie with Trevor Dashwood, a handsome celebrity novelist who takes an interest in Natalie's small bookstore.
To Natalie's surprise, her time of mourning is full of revelations, from unearthing artifacts hidden in the bookshop's walls, to uncovering the truth about her family, her future, and her own heart.
I did enjoy this book although it was pretty predictable.  I loved the storyline though about trying to save the bookshop.  The history of the store kept me interested but i was disappointed in the ending.  I thought it was rushed and didn't really tell what happened.
Watch Me Disappear by Janelle Brown 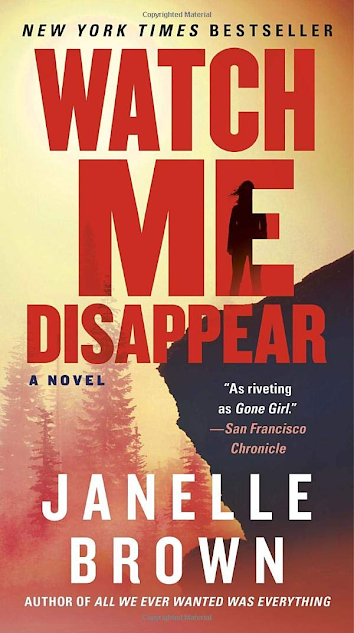 It's been a year since Billie Flanagan-a Berkeley mom with an enviable life-went on a solo hike in Desolation Wilderness and vanished from the trail.  Her body was never found, just a shattered cellphone and a solitary hiking boot.  Her husband and teenage daughter have been coping with Billie's death the best they can: Jonathan drinks as he works on a loving memoir about his marriage; Olive grows remote from both her father and her friends at the all-girls school she attends.
But then Olive starts having strange visions of her mother, still alive. Jonathan worries about Olive's emotional stability, until he starts unearthing secrets from Billie's past that bring into question everything he thought he understood about his wife.  Who was the woman he knew as Billie Flanagan?
Together, Olive and Jonathan embark on a quest for the truth about Billie-but also about themselves, learning in the process, about all the ways that love can distort what we choose to see.
This was an interesting story.
The daughter begins “seeing” her mother in some sort of hallucination or waking dream. The husband begins to discover his wife was telling him lies. No one seems to know who the “real” Billie Flanagan was. The whole premise of the book is how much do we really know those we love.  Along the way, Olive and Jonathan encounter people from Billie’s past while also trying to move forward with their lives.  The ending was a surprise, but not really!
Search for Her by Rick Mofina 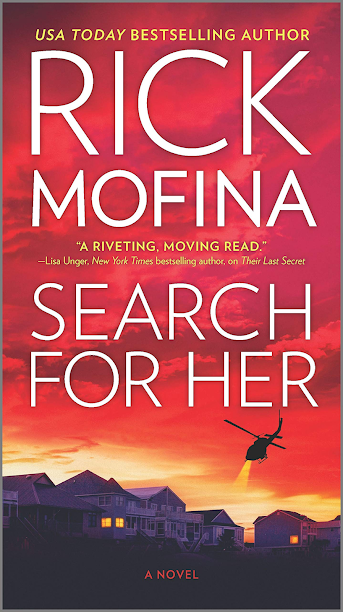 At a truck stop near Las Vegas, fourteen-year-old Riley Jarrett vanishes from her family's RV , turning their cross-country dream of starting over into a nightmare.
Investigators have their work cut out for them.  The massive, bustling truck plaza in the desert is the perfect place for someone to disappear-or be taken.
Detectives pursue every chilling lead as all eyes fall to the newly blended family with a tragic past.  With the clock ticking down on the likelihood that Riley's alive, suspicions run deep.  Everyone-from Riley's mom to her stepdad to her stepbrother and her ex-boyfriend-has something to hide.  And their secrets could prove deadly.
There was so much going on in this family that it was almost distracting to the disappearance of the daughter.  Parts of it dragged but the ending was a bit of a surprise. 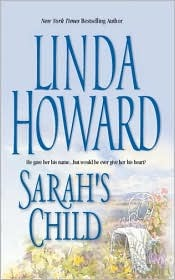 A tragic accident took everything that mattered to Rome Matthews-his wife, Diana, and their two little boys.  And it robbed Sarah Harper of her best friend.  In the two years after the tragedy, Sarah wanted nothing more than to reach out to Rome.  But she knew it was vital she stay away, guarding the secret she had kept from him and Diana all those years-that she was in love with her best friend's husband.
But now Rome needs her.  He wants to lose himself in the passion he feels for Sarah.  Knowing he is trapped by a grief that won't let go, and desperate to help him escape his pain, she willingly gives him what he so desperately craves.  Though another woman will hold his heart forever, Sarah agrees to be his wife, knowing that everything has a price, including love.  It is a price she is willing to pay, but one that will demand all of her courage and her heart.
Then something totally unexpected rekindles her hidden hope that a marriage of convenience will become a union of love.  Now it all comes down to her husband.  Will Rome keep fighting his own growing need for a women who dares him to believe there are second chances in life...or will he give in to the power of love and miracles?
This was a frustrating read, to say the least.  How any woman would put up with what this man put her through is beyond belief!  She allowed herself to be a complete doormat and was so grateful for any little scrap he threw her way.  Regardless of the ending, how anyone would stay in this kind of relationship is pretty sad.
House of Birds by Elizabeth Tettmar 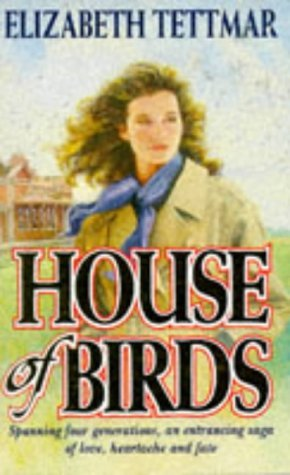 Carla Foster has been caring for her great-grandmother, Lottie, for seven years.  When Lottie dies Carla is alone in the world, her mother dead and her father unknown.  She finds she has a large inheritance, and, unexpectedly, the old gatehouse deep in rural Norfolk which had been Lottie's first home.  Determined to solve the mystery of her unknown father Carla begins to trace the history of the Foster women.  Moving from Norfolk to London we follow the lives of each of the women in turn: in 1913 a traumatic event leads Lottie to flee her home and build a new life for herself in London; Charlotte, Lottie's daughter, embittered by her mother's past, makes a tragic misalliance until she discovers the love of an American airman; and Charley, Charlotte's daughter, beautiful and rebellious, falls for an artist who must paint her into his life.
I enjoyed this book following the 4 generations of the Foster women.  From Lottie being in service at the big mansion to her great great granddaughter coming to terms with the history.
Posted by Janice at 3:16 PM 4 comments:
Newer Posts Older Posts Home
Subscribe to: Posts (Atom)